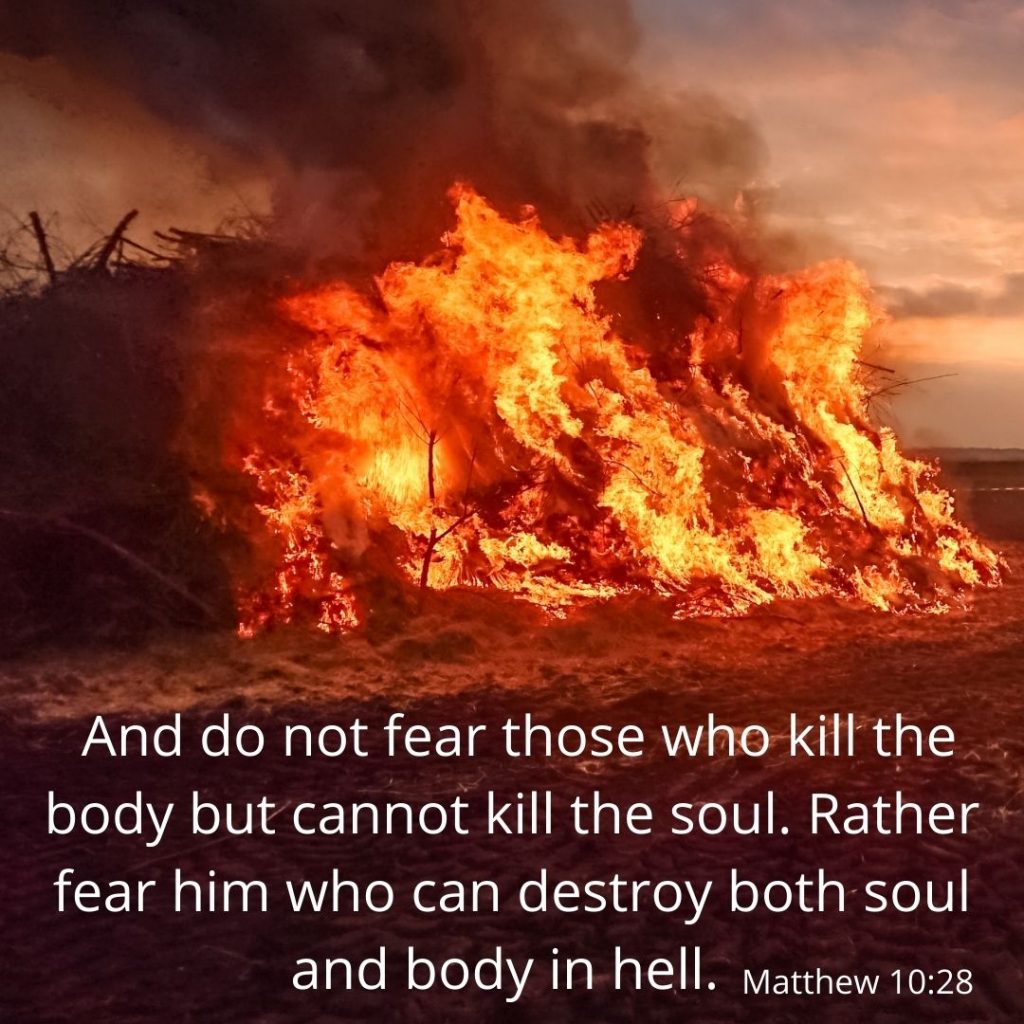 Generally people in many societies do not acknowledge the existence of hell. Do you believe in eternal punishment? People ask how can a loving God send people to torment? Wasn’t the idea of hell to scare people in the olden days and control their behaviour? Let’s briefly look at this subject and consider the biblical perspective.

The Greek word pronounced “Gehenna” is frequently translated in the bible as “hell”.  Gehenna existed just outside Jerusalem in the Valley of Hinnom where a continual fire destroyed Jerusalem’s rubbish. It became a symbol of hell and was also known as the Lake of Fire.

The medieval view influences many people’s understanding of hell. Bosch and Dante pictured hell as a place where Satan rules and demons torture the damned. However, the Bible states God rules in hell (Matthew 10:28). Satan and his demons are sent there to be punished and will have no authority (Matthew 25:41; Revelation 20:10). In Revelation the term Lake of Fire appears 4 times (Revelation 19:20; 20:10; 20:14-15). It is a place prepared for fallen angels not people. Jesus stated:

“Then he will say to those on his left, ‘Depart from me, you cursed, into the eternal fire prepared for the devil and his angels. (Matthew 25:41)

“- And he called out, ‘Father Abraham, have mercy on me, and send Lazarus to dip the end of his finger in water and cool my tongue, for I am in anguish in this flame.’ But Abraham said, ‘Child, remember that you in your lifetime received your good things, and Lazarus in like manner bad things; but now he is comforted here, and you are in anguish.” (Luke 16:24-25)

Humanists believe that human nature is essentially good and we reap what we deserve in this life.  There is no afterlife. The quality of life is what is important. Avoiding disease and suffering and being happy is the goal. Motivated not by fear of the after life but rather the manner of dying. Euthanasia used to avoid a bad death. Suicide to avoid a bad life. Quality of life in this world is all that matters.  However, the Bible states people are sinners and can do no good (Romans 3:23; 6:23) and we will have to give account for what we do in this life (Matthew 12:36; Hebrews 4:13; 1 Peter 4:5).

Humanists believe there is no judgment following death. Society makes and upholds the rules. We are our own judges. Offenders need rehabilitation not punishment. The bible says the wages of sin is death (Romans 6:23) and all will face judgment before God (Hebrews 9:27; Revelation 20:11).

In this age of consumerism, hell is not a good selling point. The “just do it” frame of mind pervades and persuades people that anything goes. But the bible says God is the provider of all we need (1 Timothy 6:17).  Relativism states there is no absolute truth or absolute facts. All is relative to a personal frame of reference. On the other hand the Bible says the Word of God is truth (John 17:17; John 14:6).

Objections to the existence of hell fall into roughly five categories.

All these are rationalistic arguments that have no basis in scripture. They appear on the surface to be good arguments. But they deny the revelation of God in the scriptures. God is just and is the source of all justice (Deuteronomy 32:4; Isaiah 30:18). He is the source of morality, infinitely wise (1 Timothy 1:17), fair, just, merciful and compassionate, accepting all who repent, turning from themselves to him. God wants no-one to perish (Matthew 18:14)

Alternative views to hell include:

These views depend on deduction, speculation or rationalisation and not on what the Bible teaches. If there is no final judgment then people can behave in any way they want so long as they avoid punishment in their life time. A murdering dictator may be able to avoid justice by ending his life. Is that fair? Is that justice? If there is no hell then you do what ever you want. There is no punishment. But our inner sense of justice knows that is not right.

Denying the existence of hell reduces the imperative to preach the gospel. Jesus commanded us to go into all the world and preach the gospel (Mark 16:15). We do not need to fear hell. We need to fear God because that is the beginning of wisdom (Psalm 111:10; Proverbs 9:10). The power of life is in the hands of God (Job 33:4). He knows all about us (Psalm 139:1-18).

“I tell you, my friends, do not fear those who kill the body, and after that have nothing more that they can do. 5 But I will warn you whom to fear: fear him who, after he has killed, has authority to cast into hell. Yes, I tell you, fear him! Luke 12:4-5)

All though the Bible God calls on people to repent, to turn from their sinful ways. To those who do repent and believe in the Son of God he will give everlasting life. But, to those who do not believe, the wrath of God abides on them (John 3:36). God the Father sent Jesus to die on the cross to taste death for us and to pay for our sins (Hebrews 2:9). We receive forgiveness by the grace of God (Ephesians 2:8-9), giving us forgiveness we do not deserve, but we are forgiven because of what Jesus did. Believers need not fear hell, God promises those who believe in Jesus will be with him in eternity.