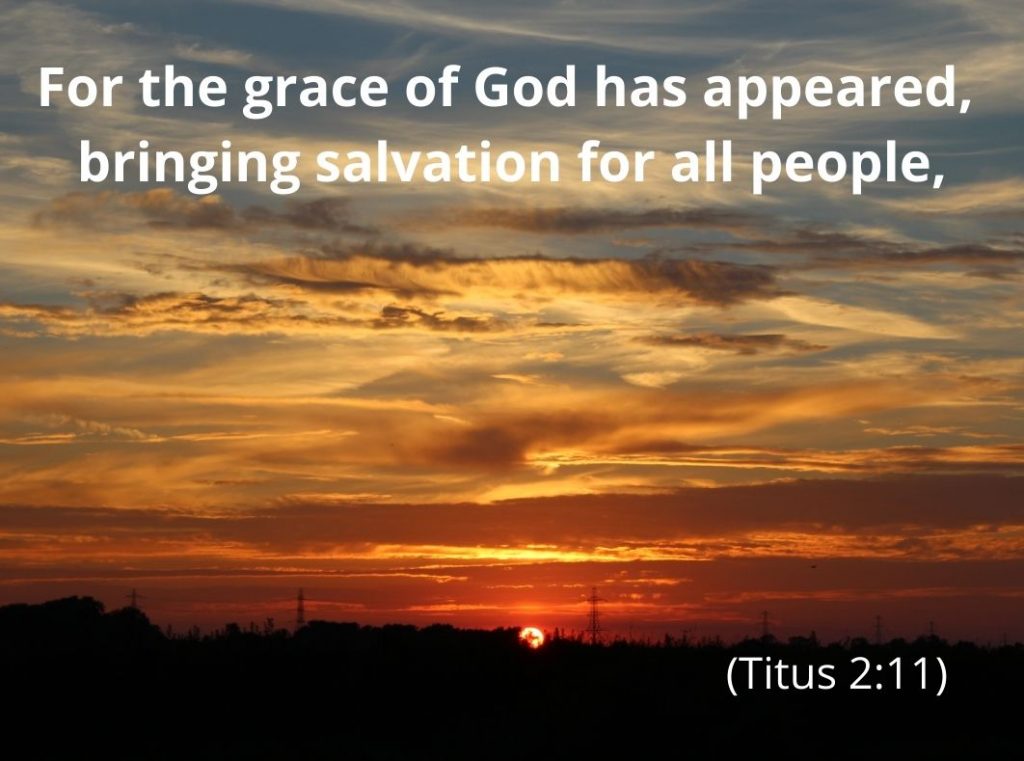 The grace of God is one of the most important subjects that the Apostle Paul taught about. This post aims to introduce the idea of the grace of God drawn from what Paul taught in his epistles. The 1st-century concept of grace and patronage will also be explored from a biblical perspective.

The grace of God gives us what we do not deserve. God shows us his steadfast love, mercy, and compassion by sending his only Son to die for us. The most precious gift we could ever receive, which we do not deserve. His glorious grace is revealed to us in Jesus Christ our Lord. Christ gave up his life that we might live (John 10:17).

People define grace in different ways (see Got Questions or Bible Study Tools for example). We have a lot to learn about what the grace of God is really like and it may take us the whole of eternity to begin comprehending the grace extended to us through Christ Jesus.

By Grace, you Have Been Saved.

The word translated as grace comes from the koine Greek word “charis“. People in the Greek culture used “grace” as a greeting, meaning “joy and goodness to you”. Aristotle described grace as providing some much-needed thing for someone, without any desire to receive something in return.

Twelve times in Ephesians Paul uses the word grace. Paul had the revelation that the grace of God provides us with salvation. Salvation is a gift from God:

For I am not ashamed of the gospel, for it is the power of God for salvation to everyone who believes, to the Jew first and also to the Greek. (Romans 1:16)

For the wages of sin is death, but the free gift of God is eternal life in Christ Jesus our Lord (Romans 6:23)

For by grace you have been saved through faith. And this is not your own doing; it is the gift of God (Ephesians 2:8)

We can do nothing to deserve this gift from God. By grace you have been saved means: by the unmerited, merciful, loving-kindness of God, you have been given what you do not deserve and can give nothing for, which is forgiveness of your sins and the gift of eternal life in Christ.

Grace is an aspect of the steadfast, loving-kindness of God.

“The LORD, the LORD, a God merciful and gracious, slow to anger, and abounding in steadfast love and faithfulness, keeping steadfast love for thousands, forgiving iniquity and transgression and sin, (Exodus 34:6-7)

“My grace is sufficient for you”.

Paul was experiencing a difficult situation so he prayed the Lord would rectify it (2 Corinthians 12:8-9). But instead of relief, the Lord told Paul “My grace is sufficient for you”.  Let us focus on this statement.

My grace: It is the grace of God, us getting what we do not deserve, His steadfast love towards us that means we know we are accepted and loved with His love, the grace given by God.

My Grace: This is a gift from God. The huge price paid for our souls. The gift of forgiveness for all our sins surpasses all other gifts in the universe. We have been set free from death and hell because of the grace of God. Grace shows us we are accepted and pleasing to God. It shows us that we are constantly, consistently loved because it is always available to us when we turn to Him. Grace is the strength of God which is available to strengthen us when we are carrying a burden we can not bear. The trial is not removed but we are freely given God’s grace to strengthen us in the trial.

My grace is: Such a small word but so vital. It does not say will be or might be or could be. It is. Just as the name of God is I am that I am. He is. Our salvation is secure.

My grace is sufficient. What God has done for us is enough, it has met the need, no more can be done. We can do no more. He has finished the work. We are saved by grace and there is nothing we can do to deserve it. We have been chosen by the sovereign grace of God to receive His free gift of redemption. All we can do is accept it. It is for you.

The meaning of “Grace” in the 1st century

In the 1st century patronage was the main source of obtaining things you needed outside of the marketplace (DeSilva, 2000). We are not familiar with this concept because we get what we need by purchasing items using money.

In those days the supply of goods was short. Personal relationships and connections ensured a supply of rare goods. As you acquired goods from someone you became indebted to them to give them public praise and thanks. The more influential person provided the goods and the benefactor gave them a good reputation. Benefactors were indebted to patrons. This happened at all levels of society. Being a good neighbour ensured that you got assistance if you fell on difficult times. This was known in Greek as “charis” or as we often translate it “grace”. Grace encapsulated the ethos of this relationship: undeserved giving and unreserved thanks.

Charis could mean having a favourable disposition. “A helpfulness towards someone in need, not in return for anything or any advantage to the helper”. It could also denote the act or the gift itself. Charis was also the response to the benefactor, gratitude, giving public thanks and praise.

The “three graces” statue  “three graces” depicts three women dancing to illustrate this principle. One giving, one receiving and one giving and returning the favour at the same time. This dance was necessary to maintain the “economy” of supply and demand. Grace cannot be given in isolation, there must be a recipient. The giver should act with the recipient’s needs in mind, not their own needs. Generosity was highly valued. Self-interest nullified the gift. Ingratitude was a debase and unworthy act that could cause a person to be ostracised. Being a benefactor began the process not the request for a gift. Being a benefactor could involve rejection and ingratitude from some.

Grace must answer to grace. There was a debt and obligation to respond with grace (thankfulness and gratitude). You gave verbal appreciation for the favour to other people. Reputations for generosity and gratitude were vital and could be supplied by public declaration.

This whole patronage system is very visible in the scriptures. What can I give back to the Lord for all his gifts to me, praise and worship (Psa. 116:12-19)? We see Jesus highlighting the ingratitude of the nine lepers who did not come back to thank Jesus (Luke 17:12-19).

The development of the doctrine of Grace in the New Testament.

The Greek word “charis” only appears 9 times in the Gospels. Luke uses it 6 times: once describing the young Jesus as growing “in favour (charis) with God and men” (Luke 2:52); once describing the “gracious words” of Jesus (Luke 4:22) and four times when Jesus uses examples of giving with the wrong motivation therefore not getting “charis” in return (Luke 6:32-34, 17:9).

The Gospel of John however brings a slightly different use of the word grace (charis). John describes Jesus as revealing “the glory as of the only begotten of the Father, full of grace and truth” (John 1:14). John states that “grace and truth came through Jesus Christ” (John 1:17). In both cases, the use of the word grace could depict the benefactor (God) giving provision (Christ). John also said, “and of His fullness we have all received, and grace for grace”. Some commentators describe the repetition of “grace upon grace” as emphasising the point. However, it could be that John had the “dance” of grace (giving, receiving and praising) in mind. The word grace does not appear again in the gospel of John.

In Luke’s record of the Acts of the Apostles, the word grace appears in 16 verses with a much broader use of the word. The term “the grace of God” appears in Acts 11:23; 13:43; 14:26; 15:40; 20:24. This is the first time we see this phrase in the New Testament, due to the order we have. However, some believe that Luke wrote this account for Paul to use at his court appearance in Rome. If that is the case, then many of Paul’s letters would have been in circulation before “Acts” was written. Luke worked with Paul (Colossians 4:14) and was a skilled researcher. No doubt would have been familiar with Paul’s writings and ideas.

1 Thessalonians (50 AD?) and Galatians (53 AD?) were among Paul’s earliest letters. In 1 Thessalonians grace appears in the first greeting “Grace to you and peace from God our Father and the Lord Jesus Christ” possibly for the first-time connecting grace with both God the Father and God the Son, Jesus Christ.

In Galatians, Paul uses grace in six verses. He starts in the initial greeting offering “Grace to you and peace from God the Father and our Lord Jesus Christ”. Paul begins to develop a more specific spiritual connotation. He refers to being “called by grace” (Galatians 1:15) and he uses the term “grace of Christ” (Galatians 1:6) and the term “grace of God”  (Galatians 2:21). Paul encourages the reader not to set aside the “grace of God”. He noted that the leaders “James, Cephas, and John, who seemed to be pillars, perceived the grace that had been given to me,” (Galatians 2:9).  Paul believed God gave grace for specific purposes.

More significant is how Paul starts to connect grace with the Gospel. “I marvel that you are turning away so soon from Him who called you in the grace of Christ, to a different gospel,” (Galatians 1:6). This was the very reason for his writing this letter. Paul came against the Galatians who wanted to depend on the law to gain acceptance from God. “I do not set aside the grace of God; for if righteousness comes through the law, then Christ died in vain.” (Galatians 2:21). They preach a different, perverted gospel, bringing believers back into bondage to the law. Paul recounts how he even withstood Peter when there was an issue about not eating with the gentiles, denouncing hypocrisy (Galatians 2:11). Paul then presents this argument:

Douglas Moo (1996) says “Grace is one of Paul’s most significant theological terms.” (P.288). God’s justifying verdict is totally unmerited and we can do nothing to earn it. This is why Paul believes that justification can never be attained through works. God is the originator of the liberating process, the giver of the sacrifice and the recipient of the ransom for our redemption.

If we read the word grace in the scriptures it should give the picture of God the Father as the giver God, Jesus as the receiver and the Holy Spirit as the giver/receiver. The “dance of grace” is evidenced in the relationship of the triune God. God is the giver of life (1 Timothy 6:13), the mighty God giving to weak and frail humanity all they need. Jesus will receive all things (John 3:35, 13:3, given to Him by the Father and the Holy Spirit the giver of life (Romans 8:11) and the receiver of all who believe in Jesus as they become the temple of the Holy Spirit (1 Corinthians 3:16) in which he dwells.

What can we do?

What can we do? Nothing. Everything we have is a gift from God and our future is in his hands. We can do nothing to attain merit, favour or blessings from God. We can however give gratitude, and praise publicly, and declare how good God is and how his steadfast love will endure forever (Psalm 136).