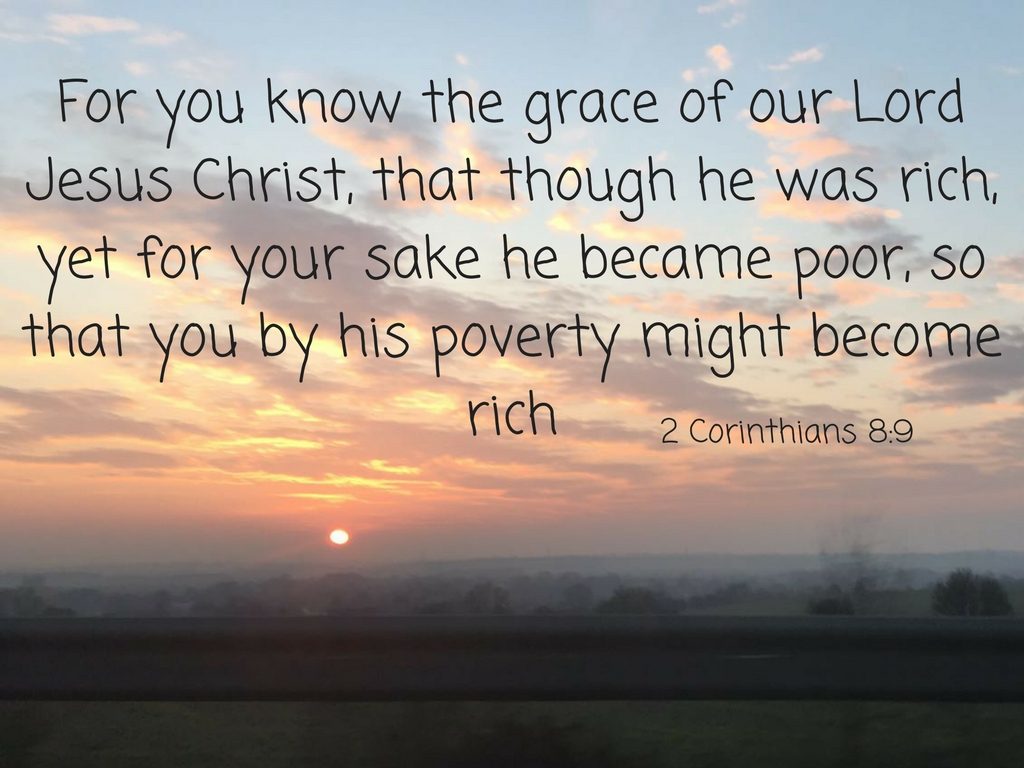 What does it mean to be poor in spirit?

1 We want you to know, brothers, about the grace of God that has been given among the churches of Macedonia,
2 for in a severe test of affliction, their abundance of joy and their extreme poverty have overflowed in a wealth of generosity on their part.
3 For they gave according to their means, as I can testify, and beyond their means, of their own accord,
4 begging us earnestly for the favor of taking part in the relief of the saints-
5 and this, not as we expected, but they gave themselves first to the Lord and then by the will of God to us. – 2 Corinthians 8:1-5

Paul tells the Corinthians of the generosity of the church of Macedonia who have given beyond what they could afford. They gave themselves to the Lord. That is the first step in any ministry. We have to be committed to Jesus who will be the author and finisher of any work we get involved in. The people who lived in Macedonia, which is the northern part of Greece, were known to be poor as they had been raided by the Roman’s when they conquered them. Corinth was in the South of Greece and was a wealthy port. So the example of poor brothers and sisters giving should have been powerful. The collection was for the saints in Jerusalem who were in big trouble. This principle of giving was shown in the Lord’s words about the widow:

42 And a poor widow came and put in two small copper coins, which make a penny.
43 And he called his disciples to him and said to them, “Truly, I say to you, this poor widow has put in more than all those who are contributing to the offering box.
44 For they all contributed out of their abundance, but she out of her poverty has put in everything she had, all she had to live on.” – Mark 12:42-44

We are not all called to give away all we have but we are called to give what the Lord asks us to give. However the Macedonians were willing givers. They had the right motive. They wanted to help and support as much as they could. The Lord always looks upon the heart. We give ourselves to Him moment by moment and He will direct our steps. He will produce in us a generous spirit

What is an act of grace? We can think about doing something, plan to do something, discuss how to do something but it is of no use unless the something becomes an action. Paul had talking with the Corinthians about collecting money for the brothers and sisters in Jerusalem who were in dire straights. However as the relationship between the Corinthians’ and Paul was a bit strained they may have been reluctant to give the money to Titus to take to Paul. Here Paul encourages them to maintain their commitment. They were giving as unto the Lord not to a man. The act of grace was also and act of faith. Other translations say “complete this gracious work”. We are called to be faithful:

Moreover, it is required of stewards that they be found faithful. – 1 Corinthians 4:2

Jesus was faithful to finish the work his father gave him to do. Jesus is named “Faithful and True”. As ever when we are asked to do something it is God who will fulfill it:

He who calls you is faithful; he will surely do it. – 1 Thessalonians 5:24

This act of grace would prove the faithfulness of the Church at Corinth to fulfill their commitment.

8 I say this not as a command, but to prove by the earnestness of others that your love also is genuine.
9 For you know the grace of our Lord Jesus Christ, that though he was rich, yet for your sake he became poor, so that you by his poverty might become rich. – 2 Corinthians 8:8-9

Paul emphasises the love Jesus has for us that while He was rich in heaven He became poor on earth. And His poverty led to our eternal salvation. Richness and poor-ness are not necessarily measured by worldly wealth. In fact the Lord is least concerned about riches. When Satan tempted Jesus with all the kingdoms of the earth and all the wealth of this world He did not esteem it above His Father’s will. Jesus said blessed are the poor IN SPIRIT and He was really looking at people’s hearts.

“Blessed are the poor in spirit, for theirs is the kingdom of heaven. – Matthew 5:3

Who is poor? The one who does not know God? The one who lives their own life without submitting to the Lord? They may gain the whole world but will loose their soul. When we realise that everything we have has been given to us by the grace of God, we can then accept we are poor in our selves. A poor spirit is not a proud spirit.

It is better to be of a lowly spirit with the poor than to divide the spoil with the proud. – Proverbs 16:19

10 And in this matter I give my judgment: this benefits you, who a year ago started not only to do this work but also to desire to do it.
11 So now finish doing it as well, so that your readiness in desiring it may be matched by your completing it out of what you have.
12 For if the readiness is there, it is acceptable according to what a person has, not according to what he does not have.
13 For I do not mean that others should be eased and you burdened, but that as a matter of fairness
14 your abundance at the present time should supply their need, so that their abundance may supply your need, that there may be fairness.
15 As it is written, “Whoever gathered much had nothing left over, and whoever gathered little had no lack.” – 2 Corinthians 8:10-15

Paul continues to encourage them to “finish the work”. Completing is important, but the world, the flesh and the devil will try to make us loose heart:

For I know that nothing good dwells in me, that is, in my flesh. For I have the desire to do what is right, but not the ability to carry it out. – Romans 7:18

He who calls you is faithful; he will surely do it. – 1 Thessalonians 5:24

Our reliance is on God. Only when we give up our live, see it crucified and truly buried will we experience sanctification. Paul goes on to speak about fairness. He does not want the people to give more than they can afford. The Jerusalem Church is in trouble and Paul suggested that what you have “in abundance” should be given to those in need so that others needs maybe met from their surplus. God wants us to care for others and bless the poor, materially and spiritually.

16 But thanks be to God, who put into the heart of Titus the same earnest care I have for you.
17 For he not only accepted our appeal, but being himself very earnest he is going to you of his own accord.
18 With him we are sending the brother who is famous among all the churches for his preaching of the gospel.
19 And not only that, but he has been appointed by the churches to travel with us as we carry out this act of grace that is being ministered by us, for the glory of the Lord himself and to show our good will. – 2 Corinthians 8:16-19

Paul is explaining how the money will be transferred to Jerusalem. Rather that Paul being directly involved he has appointed Titus and another brother who is well known (but not named here). They will ensure the money gets to Jerusalem. Paul is not only a theologian and a good orator but He is also a good planner. He knows the Corinthians are still a bit wary of him and so has other people doing the collection and delivery of the gifts from Corinth. We need to consider the call of God in our lives and make sure we are sensitive to the people we are ministering to. Are we the ones with the right gift to minister to that person or should we be humble and allow God to move by His Spirit through other members of the body?

7 So neither he who plants nor he who waters is anything, but only God who gives the growth.
8 He who plants and he who waters are one, and each will receive his wages according to his labor.
9 For we are God’s fellow workers. You are God’s field, God’s building. – 1 Corinthians 3:7-9

We all have a part to play but it is not always wise for us to try to do everything. Be sensitive to the Holy Spirit’s leading and rest in the finished work of Christ. Titus and this brother were willing and available. It is all being done for the glory of God and to reveal love to the brothers in need.

20 We take this course so that no one should blame us about this generous gift that is being administered by us,
21 for we aim at what is honorable not only in the Lord’s sight but also in the sight of man.
22 And with them we are sending our brother whom we have often tested and found earnest in many matters, but who is now more earnest than ever because of his great confidence in you.
23 As for Titus, he is my partner and fellow worker for your benefit. And as for our brothers, they are messengers of the churches, the glory of Christ.
24 So give proof before the churches of your love and of our boasting about you to these men. – 2 Corinthians 8:20-24

Paul continues quite a lengthy passage about how the gift will be protected, by Titus and the other brother, which continues into the next chapter. The use of the word blame in verse 20 is puzzling but other translations say:

2 Corinthians 8:20 (NLT) We are traveling together to guard against any criticism for the way we are handling this generous gift.

Which makes much more sense. Paul wants to be seen to be acting honourably. So has at least two witnesses. Back to Paul’s good planning skills. So often we act out of good motives but without common sense which can lead to misunderstandings. He wants to be honourable before God and before man. In verse 22 Paul mentions that Titus and the brother have often been tested, or as another translation says:

2 Corinthians 8:22 (NKJV) 22 And we have sent with them our brother whom we have often proved diligent in many things, but now much more diligent, because of the great confidence which we have in you.

Proving diligent in many things is a great attribute to have. Jesus was faithful to diligently follow the Father’s will. That is what we are called to do. Lastly Paul asked the Corinthians to follow through with their promise and to give generously as he has been boasting that they will. Reputation was absolutely vital in the ancient near east culture. To go back on your word was a horrifying social disgrace and led to great shame on the whole family. Paul is confident they will be generous.

Posted in 2 Corinthians
← Godly grief produces a repentance that leads to salvation.If you sow sparingly will reap sparingly. →