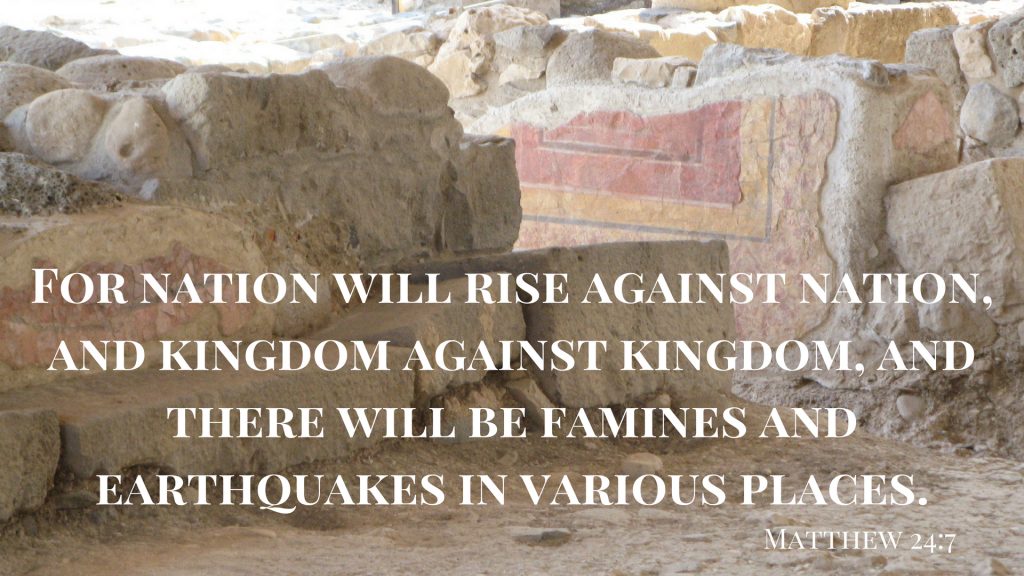 22 For we know that the whole creation has been groaning together in the pains of childbirth until now.
23 And not only the creation, but we ourselves, who have the firstfruits of the Spirit, groan inwardly as we wait eagerly for adoption as sons, the redemption of our bodies.
24 For in this hope we were saved. Now hope that is seen is not hope. For who hopes for what he sees?
25 But if we hope for what we do not see, we wait for it with patience. – Romans 8:22-25

The illustration of a woman giving birth is quite apt for the situation the earth is currently in. As a woman gets closer to giving birth the painful contractions increase in intensity and speed. The earth seems to be experiencing something similar. Many believe there is a noticeable increase in seismic activity:

“A recent study by USGS researchers found that there were more than twice as many “large” earthquakes (defined as magnitudes 7 or above) in the first quarter of 2014 than there were back in 1979. The planet saw a record number of earthquakes last April, with 13 quakes with magnitudes of 6.5.” (Linda Poon- Citylab).

When talking about the last days Jesus said:

7 For nation will rise against nation, and kingdom against kingdom, and there will be famines and earthquakes in various places.
8 All these are but the beginning of the birth pains. – Matthew 24:7-8

We are eagerly awaiting the redemption of our own bodies. Much as the earth is suffering so we suffer in this life. Heart disease, arthritis, cancer are all on the increase. We need to be delivered from a world that is broken.

Well, thank God Jesus came to do just that. He is our hope. We have not seen Him face to face but we know He is our redeemer. The Lord said to Thomas:

Jesus said to him, “Have you believed because you have seen me? Blessed are those who have not seen and yet have believed.” – John 20:29

We wait with patience for the Lord either to return to this earth or to take us home to be with Him. Our hope is firm in the promises of God that we will be raised just a Jesus was:

12 having been buried with him in baptism, in which you were also raised with him through faith in the powerful working of God, who raised him from the dead.
13 And you, who were dead in your trespasses and the uncircumcision of your flesh, God made alive together with him, having forgiven us all our trespasses, – Colossians 2:12-13

18 knowing that you were ransomed from the futile ways inherited from your forefathers, not with perishable things such as silver or gold,
19 but with the precious blood of Christ, like that of a lamb without blemish or spot.
20 He was foreknown before the foundation of the world but was made manifest in the last times for the sake of you
21 who through him are believers in God, who raised him from the dead and gave him glory, so that your faith and hope are in God. – 1 Peter 1:18-21

Our hope is in God.

Posted in Romans
← Creation waits for the revealing of the sons of God.The Spirit Himself Intercedes for Us →