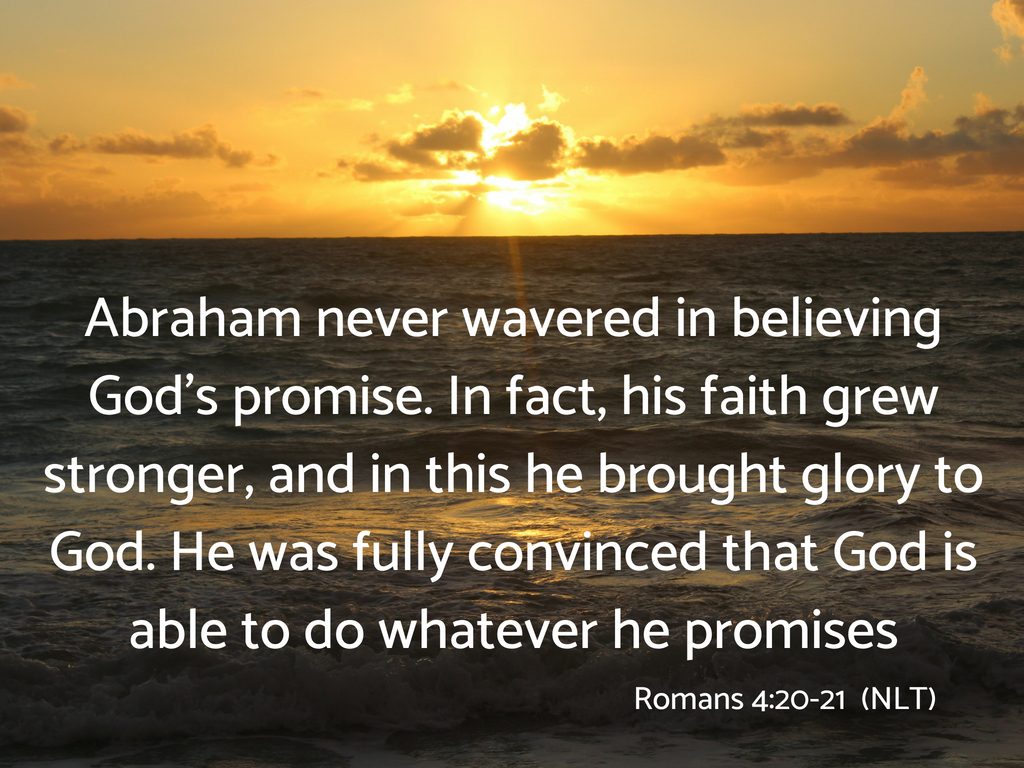 19 He did not weaken in faith when he considered his own body, which was as good as dead (since he was about a hundred years old), or when he considered the barrenness of Sarah’s womb.
20 No unbelief made him waver concerning the promise of God, but he grew strong in his faith as he gave glory to God,
21 fully convinced that God was able to do what he had promised.
22 That is why his faith was “counted to him as righteousness.” – Romans 4:19-22

Paul continues to recount the detail of Abraham’s walk of faith. He and Sarah were well advanced in years and beyond child bearing age. But, God promised Abraham that he would become the father of many nations. Abraham chose to believe God’s promise, he was “fully convinced” that God was faithful and would do what He said. It was that trust and belief that God was looking for in Abraham’s heart that was recognised by God and “counted to him as righteousness”.

I have not departed from the commandment of His lips; I have treasured the words of His mouth more than my necessary [food.]- Job 23:12 (NKJV)

King David was fully convinced that he needed to follow the leading of God. He said:

Faith allows us to praise God for His creation:

By faith we understand that the universe was created by the word of God, so that what is seen was not made out of things that are visible. – Hebrews 11:3

So if God created the universe and all that is in it we should be fully convinced that He is capable of doing anything He promises:

But Jesus looked at them and said, “With man this is impossible, but with God all things are possible.” – Matthew 19:26

Jesus knew all things were possible with God but He also knew that God’s will was more important than His own human will. He taught us to pray:

Your kingdom come, your will be done, on earth as it is in heaven. – Matthew 6:10

And Jesus gave us the ultimate example when He submitted His will to the will of the Father:

If we are fully convinced that God will fulfil His promises then we will be obedient to God leading. As we get strong in faith, God gets the glory He deserves.

Posted in Romans
← Saved by GraceCounted as Righteous →