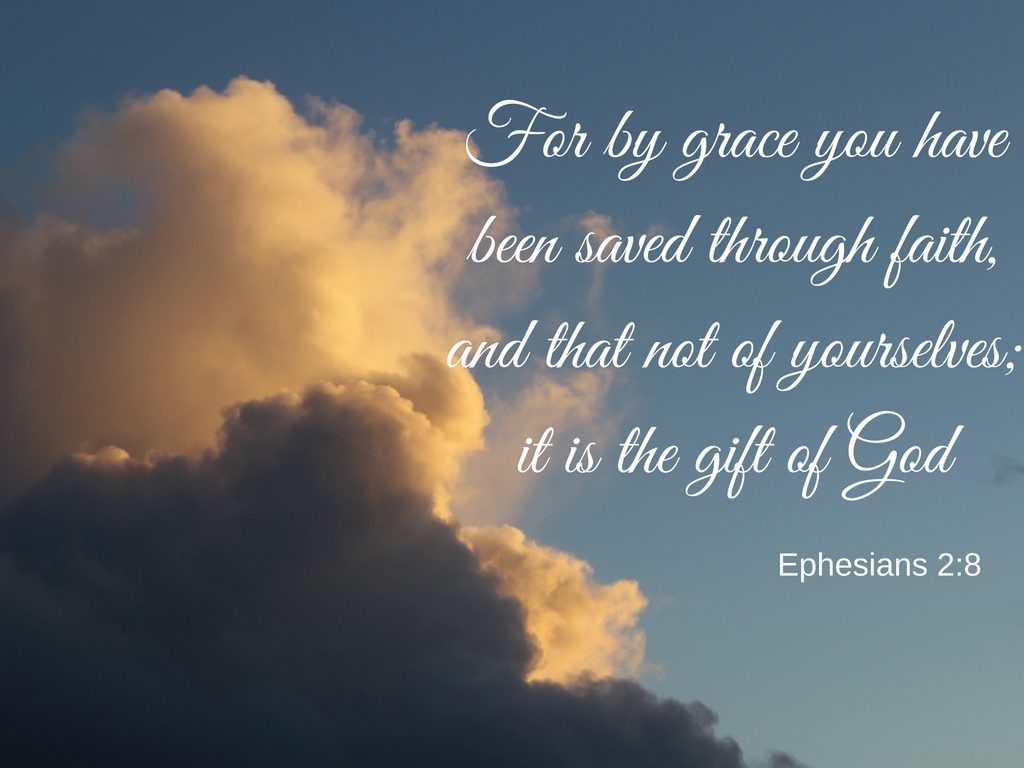 16 That is why it depends on faith, in order that the promise may rest on grace and be guaranteed to all his offspring-not only to the adherent of the law but also to the one who shares the faith of Abraham, who is the father of us all,
17 as it is written, “I have made you the father of many nations”-in the presence of the God in whom he believed, who gives life to the dead and calls into existence the things that do not exist.
18 In hope he believed against hope, that he should become the father of many nations, as he had been told, “So shall your offspring be.” – Romans 4:16-18

We are saved by grace.

But we believe that we will be saved through the grace of the Lord Jesus, just as they will.” – Acts 15:11

For by grace you have been saved through faith. And this is not your own doing; it is the gift of God, – Ephesians 2:8

who saved us and called us to a holy calling, not because of our works but because of his own purpose and grace, which he gave us in Christ Jesus before the ages began, – 2 Timothy 1:9

It is the mercy, the steadfast love and compassion of God that gives us what we do not deserve. But, we access that grace through faith. They work together. We are “saved by grace through faith” Grace is extended towards us as a gift but we have to take that gift and receive to in order for it to become effective in our experience.

Abraham believed the promises of God and was therefore made right before God. He became the father of us all who believe. God gave him a son at a point in his life when his wife Sarah was far to old to have children. Abraham believed God when He said “should become the father of many nations”. God gave life in a situation where there was none. Therefore Abraham recognised personally that God is the giver of life.

God calls into existence the things that do not exist. By his word the world was formed. In Genesis chapter one “and God said” appears nine times as He formed creation. The word of God is powerful:

The LORD utters his voice before his army, for his camp is exceedingly great; he who executes his word is powerful. For the day of the LORD is great and very awesome; who can endure it? – Joel 2:11

12 For the word of God is living and active, sharper than any two-edged sword, piercing to the division of soul and of spirit, of joints and of marrow, and discerning the thoughts and intentions of the heart.
13 And no creature is hidden from his sight, but all are naked and exposed to the eyes of him to whom we must give account. – Hebrews 4:12-13

Believing in the word of God gives us hope. Hope for a future with God throughout eternity, being given life when we were dead in our sins. Called to exist with God by His grace, through faith.

Posted in Romans
← Trust in God gave Faith to Act in Obedience.Fully Convinced →