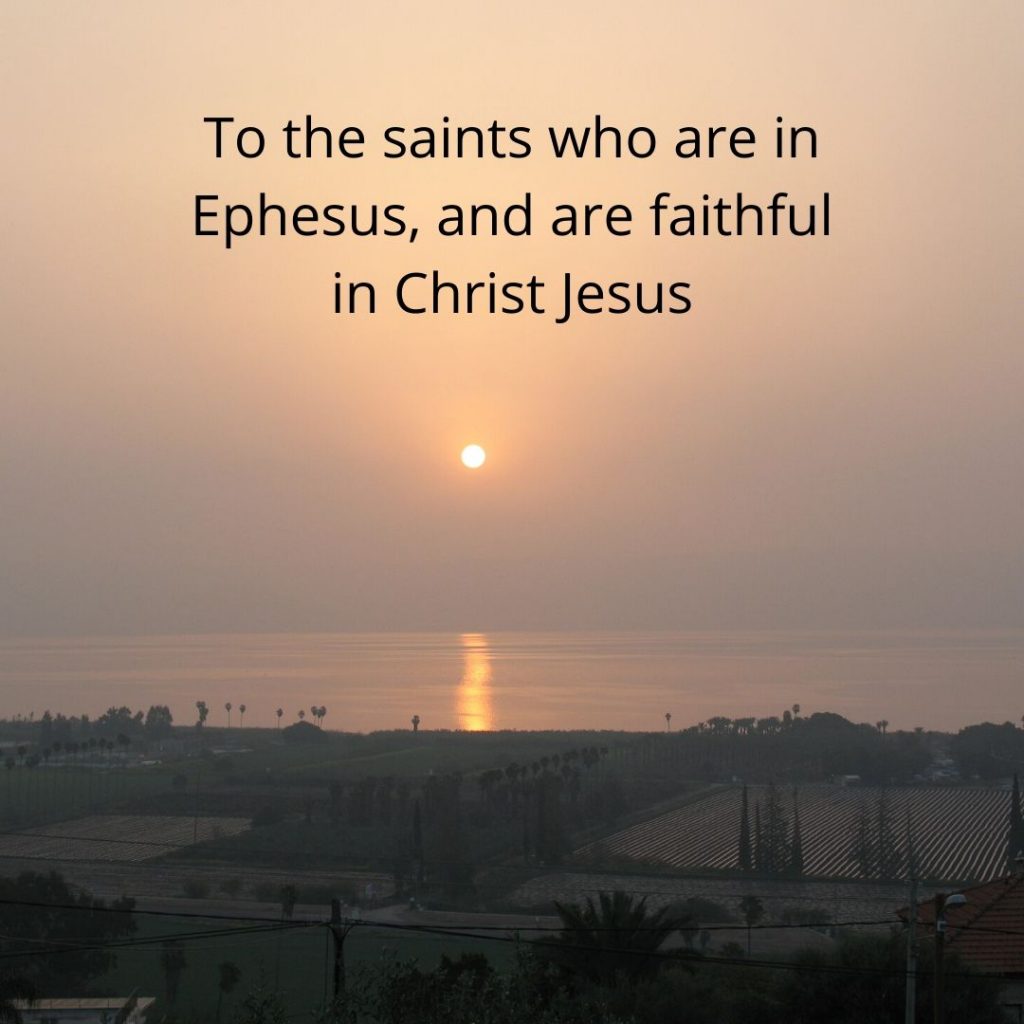 Paul, an apostle of Christ Jesus by the will of God, to the saints who are in Ephesus, and the faithful in Christ Jesus: Grace to you and peace from God our Father and the Lord Jesus Christ.

Ephesus was an important place for Paul. He had worked there for over three years planting a church (Acts 19:1). Paul wrote the letter to the Ephesians while he was in prison in Rome. He also wrote to the Colossian church at that time. In the letter to the Colossians Paul talked about Christ being the head of the Church (Colossians 1:18). In Ephesians, he talked about the church being the Body of Christ (Ephesians 4:12). The letter to the Ephesians is unusual because some believe it was an open letter to many churches. In some of the early copies of this letter, Ephesus is not mentioned, which has led some to believe it was a letter designed to be circulated among all the churches.

The Name of Jesus

Paul starts this letter mentioning Jesus in different ways, five times in the first two sentences. We know the Son of God by his name “Jesus”, but Joseph was told in a dream to call the child Yeshua (meaning “Yahweh is salvation”) “for he will save his people from their sins” (Matt 1:21). The English translation of Yeshua, Jesus, is from the Latin name Iesus, which transliterates the Koine Greek name (Ἰησοῦς Iēsoûs). The English version of Yeshua is Joshua.

Does it matter? Not really, there are thousands of languages across this world and the name of Jesus is different in many of them. What is important is that we worship the revealed Son of God, the Lord Jesus Christ and put our trust and faith in him alone. Christ means anointed one and is equivalent to the term messiah and Lord is the title given to Jesus who is the Lord of Lords (Psalm 136:3, Rev 19:16).

Paul begins with defining who he is: “an apostle of Christ Jesus”. This was important because some questioned what authority he had. He was not a disciple of Jesus but described himself as one born out of time with the others:

8 Last of all, as to one untimely born, he appeared also to me. 9 For I am the least of the apostles, unworthy to be called an apostle, because I persecuted the church of God. – 1 Corinthians 15:8-9

Paul was very aware that he persecuted the church (Acts 22:4) before he turned to Jesus and believed. Some still were suspicious of him, but he knew his calling. An apostle is someone who is sent as a messenger. Jesus had twelve apostles who became especially known as the Apostles (usually capitalised). Paul understood that he was called by Jesus to be an apostle, who would take the gospel specifically to the Gentiles, (the people of the world who are not Jewish).

The will of God.

Jesus spent time in prayer (Luke 11:1, Matthew 26:36, John 17:1). As a man, Jesus had to communicate with His Heavenly Father. In the Garden of Gethsemane just before His crucifixion Jesus asked his Father if it was possible to change the plan: “My Father, if it be possible, let this cup pass from me; nevertheless, not as I will, but as you will.” (Matthew 26:39). In his humanity, Jesus was terrified of going to the cross but He wanted above all to do His Fathers will and to finish the work God had sent him to do, to give his life as a sacrifice for our sins (Hebrews 10:12). The way to be sure you are in the will of God is to pray, ask, seek and then you shall find (Matthew 7:8, Luke 11:10).

Paul is writing to the “saints who are in Ephesus”. What does it mean to be a saint? The bible does not describe a special type of person who has been canonised because of their holy or virtuous life. In the Bible “saints” are all those who believe in Christ Jesus and are part of his church, the faithful in Christ Jesus.

“In Christ Jesus” could be seen as the main theme of this epistle. What does it mean to be in Christ Jesus? What is our identity? Further on in this chapter and letter we will see a list of what we have in Christ Jesus: blessings in the heavenly places; made holy and blameless; being adopted; being redeemed; receiving forgiveness; given an inheritance; sealed by the Holy Spirit all because we are in Christ Jesus.

Paul goes on to say “Grace to you and peace from God our Father and the Lord Jesus Christ” Paul frequently used this greeting. He wanted people to experience the grace of God and the peace of God. Grace is the English translation of the Greek word Charis. Just as we often say “Hi” as a greeting the Greeks would say “Charis” meaning “rejoice”. Paul developed a deeper meaning for the word grace in his letters which will become more apparent as we go through this letter.

Paul also referred to God as “our Father”, the same way Jesus taught us to pray “Our Father in heaven” (Matthew 6:9). Just pause a moment to consider this. God the creator of the heavens and the earth, the all-powerful, all-knowing Holy God calls Himself our Father. As Paul put in in Galatians:

6 And because you are sons, God has sent the Spirit of his Son into our hearts, crying, “Abba! Father!” 7 So you are no longer a slave, but a son, and if a son, then an heir through God. – Galatians 4:6-7

The Holy Spirit bears witness that God is our Father our ABBA (a most affectionate term a bit like our word Daddy). It is mind-blowing. All this is available to those who are in Christ Jesus. As we go through Ephesians we will see more clearly what we have been given in Christ Jesus.

Posted in Ephesians
← Glory forevermoreBlessed be the God and Father of our Lord Jesus Christ. →