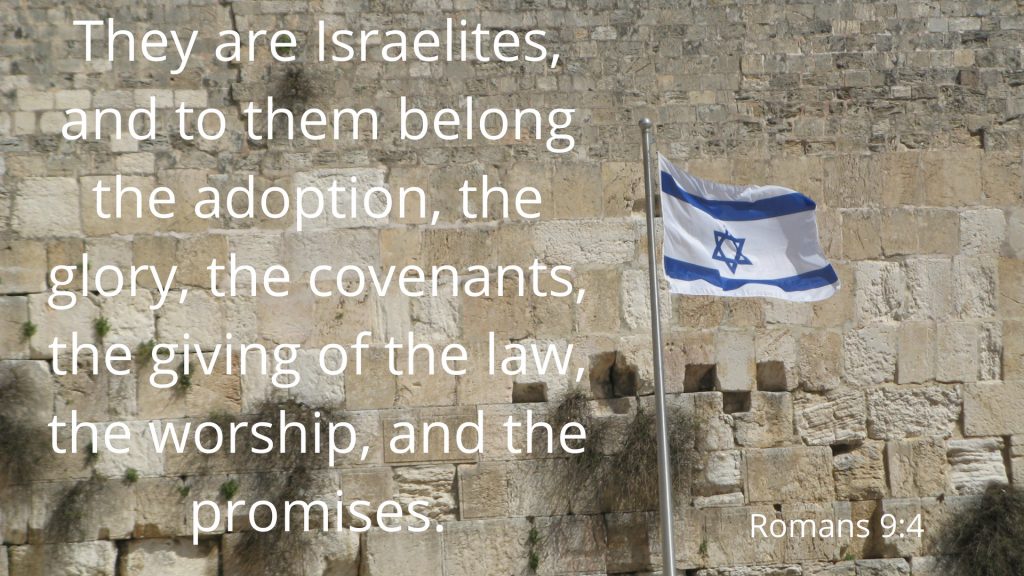 1 I am speaking the truth in Christ-I am not lying; my conscience bears me witness in the Holy Spirit-
2 that I have great sorrow and unceasing anguish in my heart.
3 For I could wish that I myself were accursed and cut off from Christ for the sake of my brothers, my kinsmen according to the flesh.
4 They are Israelites, and to them belong the adoption, the glory, the covenants, the giving of the law, the worship, and the promises.
5 To them belong the patriarchs, and from their race, according to the flesh, is the Christ, who is God over all, blessed forever. Amen. – Romans 9:1-5

As we move into chapter 9 of the letter to the Romans theologians point out that in the next three chapters Paul deals with the dilemma about the promises of God to the Children of Israel and how the coming of Christ effects them. Paul starts by stating his love for Israel. He wants his people to be saved. He even uses the hyperbolic idea that he wishes to be accursed so that Israel might be saved. But of course it is only faith in the death and resurrection of Jesus that can bring salvation. Moses prayed a similar prayer.

31 So Moses returned to the LORD and said, “Alas, this people has sinned a great sin. They have made for themselves gods of gold.
32 But now, if you will forgive their sin-but if not, please blot me out of your book that you have written.” – Exodus 32:31-32

This statement reveals the person (Paul, Moses) are so in tune with the heart of God that they would give their life, their hope and themselves up that others would be saved. In essence that is what both did. They lived the self-sacrificial life that Jesus describes as “taking up their cross”:

24 Then Jesus told his disciples, “If anyone would come after me, let him deny himself and take up his cross and follow me.
25 For whoever would save his life will lose it, but whoever loses his life for my sake will find it. – Matthew 16:24-25

Paul lost his life (as described in Acts 22) giving up all he held dear and followed Jesus. Moses lost his life at the burning bush (Exodus 3:2). Each chose to follow God when the way was revealed. In this we see a type of the different ways to obey God under the Old Testament and the New Testament. In both the Old and the New God has given promises that He will fulfil, that lead to salvation. In the Old believe that a Messiah is coming, in the New believe the Messiah has come in the person of the Lord Jesus Christ. There really is no difference. It all depends on faith in the Messiah, the Son of God, the Word of God. Both Jews and Gentiles who believed in the coming Messiah during the Old Testament period were saved. Those who now believe in the revealed Messiah, Jesus Christ will be saved. It all depends on belief in the Son of God. Sadly the Jewish religion denied and still denies that Jesus was the Messiah and this is what grieved Paul. The Jewish people were adopted by God and made a special nation:

5 Now therefore, if you will indeed obey my voice and keep my covenant, you shall be my treasured possession among all peoples, for all the earth is mine;
6 and you shall be to me a kingdom of priests and a holy nation.’ These are the words that you shall speak to the people of Israel.” – Exodus 19:5-6

Israel was given the Covenants, the Law , the patriarchs, the prophets and yet still many did not believe. In verse 5 Paul declares that Jesus is God. Although there is some debate about the translation of the Greek in this verse (as there is no punctuation in Greek) most modern translations are similar to the way the ESV presents it “Christ, who is God over all”. Jesus was fully God come in human form. God in man. If this is not the truth then we believe in vain and there is no hope of salvation (1 Corinthians 15:14-21). But that is not Paul’s message, his message is hope in Jesus Christ, out redeemer. Paul is now going to present how the gospel, the coming of Christ, who is God over all, effects the Chosen People of God, the Jewish nation, Israel.

Posted in Romans
← All things work together for good, for those who love God.Covenants – have not failed →