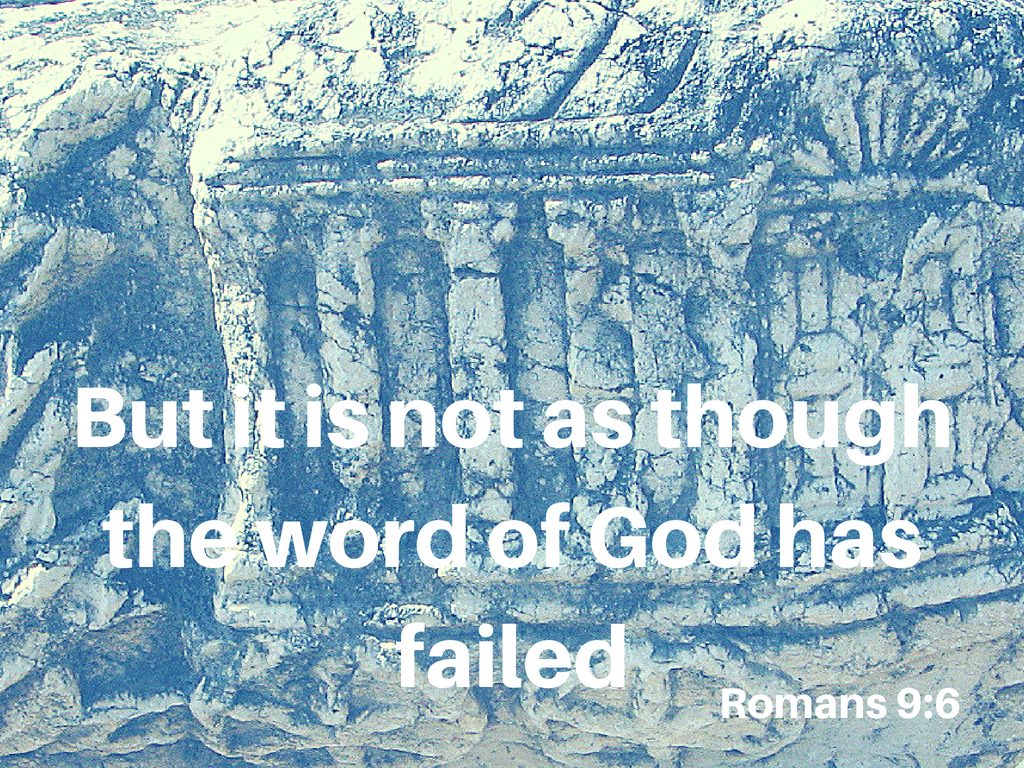 The Children of Israel obtained promises from God that were covenants, an agreement that brings about a relationship between God and His people. The covenants given to Abraham, Moses and David are the basis of the Jewish religion. Here Paul says that the word of God has not failed. With the coming of Jesus the covenants were fulfilled but they still stand. The covenants have not failed. God has chosen Israel to be a nation that reveals His glory but their rebellion and unbelief has prevented the blessing God has for them to be fully fulfilled as yet.

21 They forgot God, their Savior, who had done great things in Egypt,
22 wondrous works in the land of Ham, and awesome deeds by the Red Sea.
23 Therefore he said he would destroy them- had not Moses, his chosen one, stood in the breach before him, to turn away his wrath from destroying them. – Psalm 106:21-23

And do not presume to say to yourselves, ‘We have Abraham as our father,’ for I tell you, God is able from these stones to raise up children for Abraham. – Matthew 3:9

39 They answered him, “Abraham is our father.” Jesus said to them, “If you were Abraham’s children, you would be doing the works Abraham did,
40 but now you seek to kill me, a man who has told you the truth that I heard from God. This is not what Abraham did.
41 You are doing the works your father did.” They said to him, “We were not born of sexual immorality. We have one Father-even God.”
42 Jesus said to them, “If God were your Father, you would love me, for I came from God and I am here. I came not of my own accord, but he sent me. – John 8:39-42

Salvation is only through belief in Jesus. God sent Him to die on the cross for us to pay for our sins. Whether you are a Jew by birth or a Gentile there is only one way to the Father and that is through the Son.

6 Jesus said to him, “I am the way, and the truth, and the life. No one comes to the Father except through me.
7 If you had known me, you would have known my Father also. From now on you do know him and have seen him.” – John 14:6-7

Jesus is the only mediator, redeemer and the Messiah that fulfills the covenants God gave to the Jews. The children of that promise are the children of God.

Therefore he is the mediator of a new covenant, so that those who are called may receive the promised eternal inheritance, since a death has occurred that redeems them from the transgressions committed under the first covenant. – Hebrews 9:15

Posted in Romans
← Israel: from them is the Christ, who is God over all, blessed foreverBut seek first the kingdom of God and his righteousness →