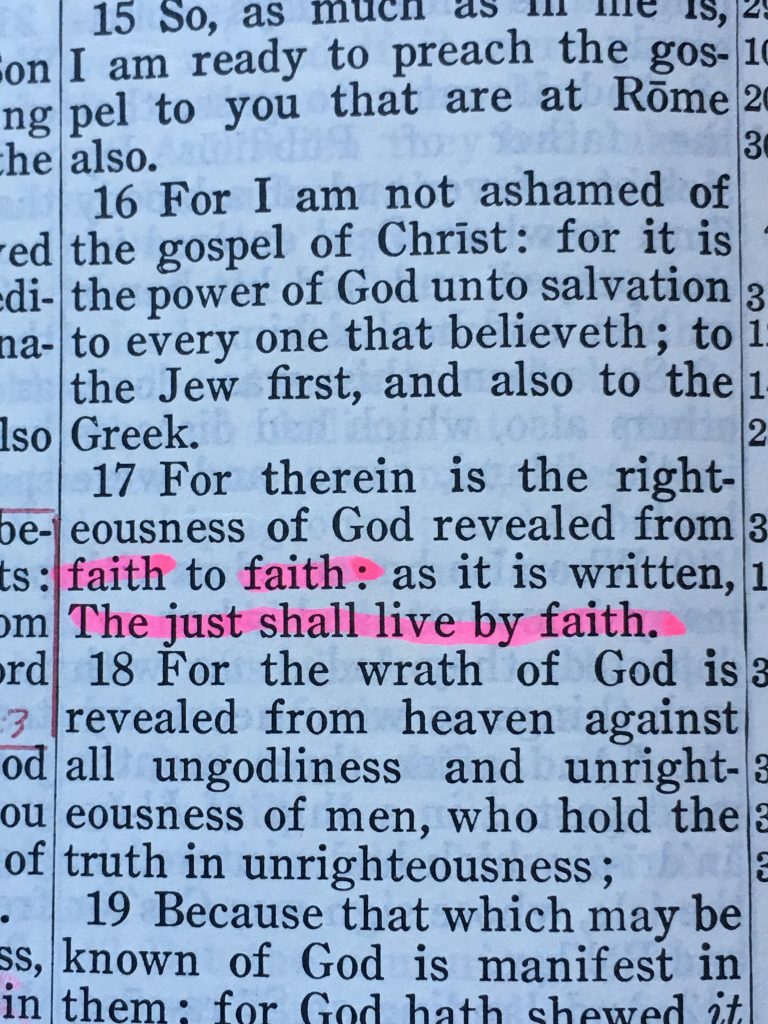 16 For I am not ashamed of the gospel, for it is the power of God for salvation to everyone who believes, to the Jew first and also to the Greek.
17 For in it the righteousness of God is revealed from faith for faith, as it is written, “The righteous shall live by faith.” – Romans 1:16-17

So we come to the central point of the introduction and the main theme of the letter to the Romans. In these two verses Paul outlines the content of the letter. Firstly: “I am not ashamed of the gospel”. Paul was willing to stand and be counted for the Gospel, he gave his life to further the gospel, he took the ridicule and hatred from his fellow Jews and the mocking and despising of the Greeks. He was not reluctant to act for fear of embarrassment or humiliation.  Because he knew the gospel is “the power of God for salvation” Secondly: the gospel needs power. Not the power of a good speaker, not a person who can reduce an audience to tears, or shouts of agreement, but the power of the Holy Spirit. Without that nothing can happen. With that anything can happen. God with us, in us and through us through the indwelling Spirit of God:

Thirdly “to everyone who believes, to the Jew first and also to the Greek.” The gospel is for everyone. Followers of the Jewish faith believed they were the only people that God had chosen and thought the rest of the world were barbarians, dogs,  due for the fires of shoel. But Paul was the apostle to the Gentiles:

For this I was appointed a preacher and an apostle (I am telling the truth, I am not lying), a teacher of the Gentiles in faith and truth. – 1 Timothy 2:7

Many of his letters deal with the difficulties the church faced with this issue in the first century. But Christ came for all.

Fourthly:”For in it the righteousness of God is revealed from faith for faith”.  How can a man be righteous before a holy God (Job 9:2)? The question that haunts people. How can I be good enough to please God? Well you can’t. His righteousness is not earned but imparted as a gift, by faith, through faith in Jesus.

And fifthly “as it is written, “The righteous shall live by faith.””  The greatest tenant of Christian doctrine. Salvation is by grace through faith. (Ephesians 1:7)

For by grace you have been saved through faith. And this is not your own doing; it is the gift of God, – Ephesians 2:8

Many books have been written on this important subject. The reformation began when Luther received the revelation that righteousness was a gift not an act. R.C. Sproul describes it like this: “here was a righteousness that God in His grace was making available to those who would receive it passively, not those who would achieve it actively, but that would receive it by faith, and by which a person could be reconciled to a holy and righteous God.”  Douglas Moo(1) suggests that a better translation of  “The righteous shall live by faith.” would be “The one who is righteous by faith will live.”  We are made righteous by putting our faith in Jesus Christ and in Him we shall have eternal life.

Posted in Romans
← I am eager to preach the gospel.The Wrath of God →