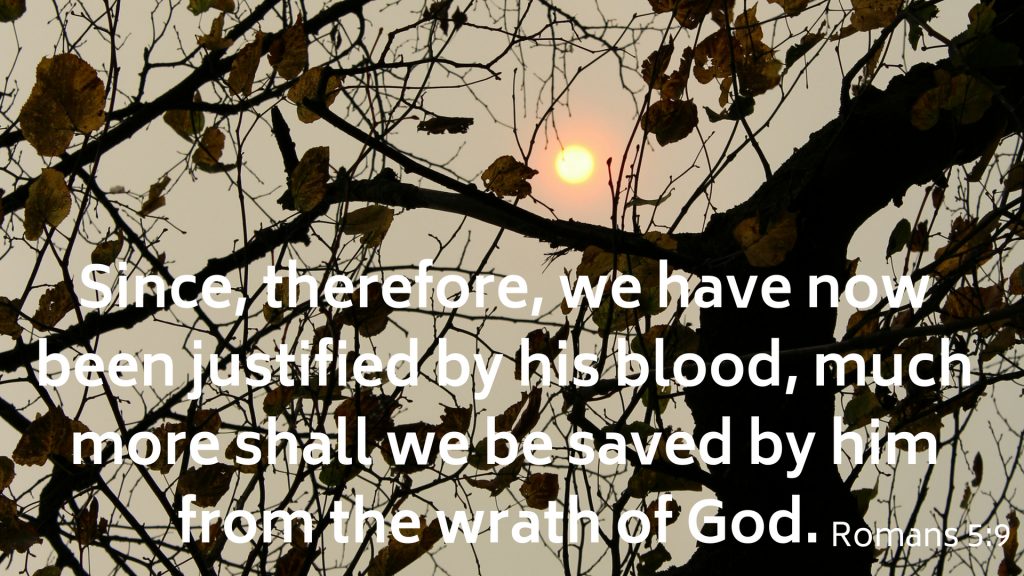 9 Since, therefore, we have now been justified by his blood, much more shall we be saved by him from the wrath of God.
10 For if while we were enemies we were reconciled to God by the death of his Son, much more, now that we are reconciled, shall we be saved by his life.
11 More than that, we also rejoice in God through our Lord Jesus Christ, through whom we have now received reconciliation. – Romans 5:9-11

So far Paul’s emphasis has been on justification by faith in Christ but now he moves on the being justified by the blood of Jesus. He has already mentioned it once in the letter to the Romans:

whom God put forward as a propitiation by his blood, to be received by faith. This was to show God’s righteousness, because in his divine forbearance he had passed over former sins. – Romans 3:25

It is surprising they these are the only two times the blood of Jesus is mentioned in this letter. But, we need to remember who the audience is for this letter. The Romans were mainly Gentiles so they would not have been steeped in the Jewish traditions of needing a blood sacrifice to atone for sins. For example the word blood appears 19 times in the letter to the Hebrews, who were from a predominantly Jewish background. This verse is pivotal in this letter because it explains in one sentence the reason for the gospel. To save human kind from the wrath of God through the sacrifice of Jesus on the cross, shearing His blood for us so that we could be washed clean from our sins. We are made right before a holy God by the precious blood of Jesus.

To reconcile means to restore friendly relations or to make an action ,view or belief compatible with another. Paul points out here that while we were still completely at odds with God, living in sin and rebellion against Him, He reaches out to us and offers to re-build the relationship with Him we were designed to have. How? Through Jesus. It is all through Jesus. He is the one who has made us comparable with a holy and just God. Even now on earth we have peace with God because of the new relationship we have with Him through Jesus. Jesus intercedes for us continually. Through Him we have life -which is knowing the Father:

And this is eternal life, that they know you, the only true God, and Jesus Christ whom you have sent. – John 17:3

We can rejoice in God, praise Him with all our heart for what He has done for us through Jesus His Son.

Posted in Romans
← Christ Died for Us.Death through sin? Life through Christ. →