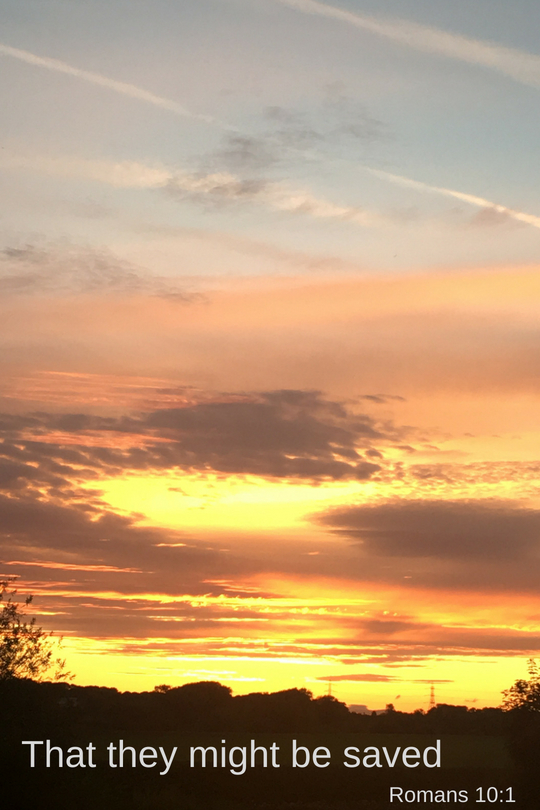 1 Brothers, my heart’s desire and prayer to God for them is that they may be saved.
2 For I bear them witness that they have a zeal for God, but not according to knowledge.
3 For, being ignorant of the righteousness of God, and seeking to establish their own, they did not submit to God’s righteousness.
4 For Christ is the end of the law for righteousness to everyone who believes. – Romans 10:1-4

Paul reveals his heart towards Israel again. He wants them to be saved. He repeats the message that salvation is by belief in Jesus and not by seeking to establish their own righteousness. Paul understood what it meant to have zeal for God but not knowledge of God. He persecuted Christians and authorised imprisonment and the death sentence for believers. He thought he was doing God a favour. Until he had a personal experience of the revelation of Christ:

15 And I said, ‘Who are you, Lord?’ And the Lord said, ‘I am Jesus whom you are persecuting.
16 But rise and stand upon your feet, for I have appeared to you for this purpose, to appoint you as a servant and witness to the things in which you have seen me and to those in which I will appear to you, – Acts 26:15-16

Then Paul became obedient to the heavenly vision, he submitted to God’s righteousness in Christ:

17 But thanks be to God, that you who were once slaves of sin have become obedient from the heart to the standard of teaching to which you were committed,
18 and, having been set free from sin, have become slaves of righteousness. – Romans 6:17-18

Paul the says Christ is the end of the law for righteousness meaning that a person can not become righteous through the law. The law is not abolished. It is still Holy and true and reveals God’s standards for our lives. But Jesus fulfilled the law.

3 For God has done what the law, weakened by the flesh, could not do. By sending his own Son in the likeness of sinful flesh and for sin, he condemned sin in the flesh,
4 in order that the righteous requirement of the law might be fulfilled in us, who walk not according to the flesh but according to the Spirit. – Romans 8:3-4

Owe no one anything, except to love each other, for the one who loves another has fulfilled the law. – Romans 13:8

Posted in Romans
← A Rock of OffenseRighteousness comes by faith →