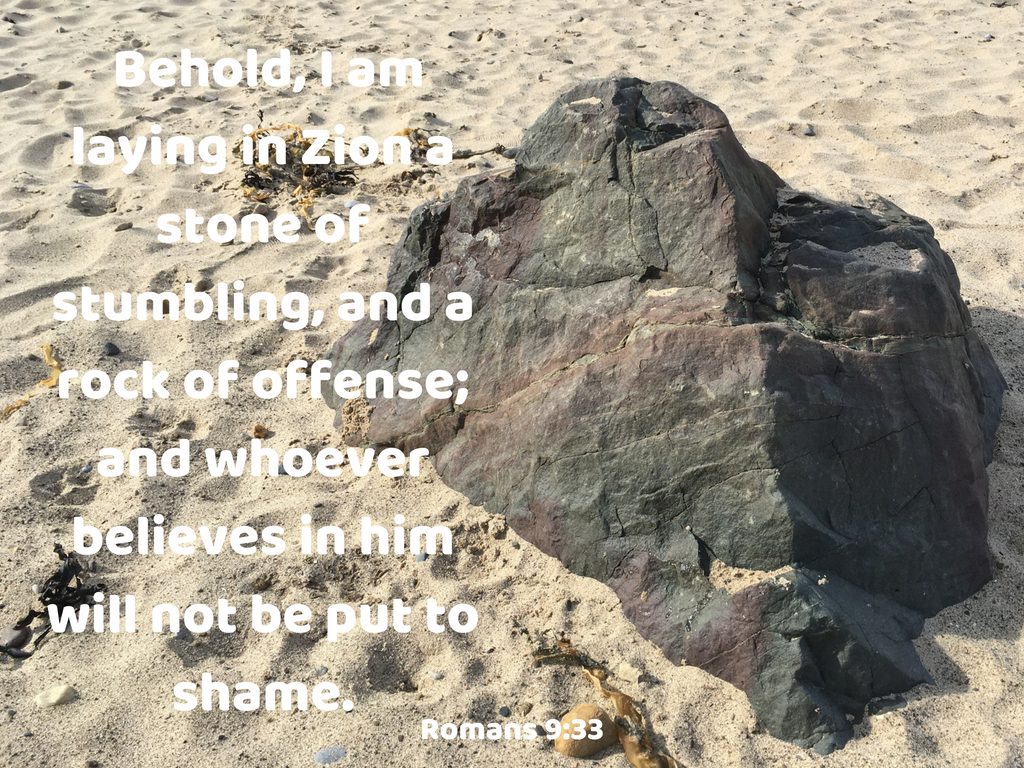 30 What shall we say, then? That Gentiles who did not pursue righteousness have attained it, that is, a righteousness that is by faith;
31 but that Israel who pursued a law that would lead to righteousness did not succeed in reaching that law.
32 Why? Because they did not pursue it by faith, but as if it were based on works. They have stumbled over the stumbling stone,
33 as it is written, “Behold, I am laying in Zion a stone of stumbling, and a rock of offense; and whoever believes in him will not be put to shame.” – Romans 9:30-33

Why should Jesus be a stumbling stone to some people? And what is a rock of offence? Well, the Jewish people were given the law which would lead them to righteousness. But they discovered that the law in itself could not succeed in making a person righteous. Paul points out that the Gentiles who did not pursue righteousness have become righteous through faith in Christ.

In Old Testament history we read of a Syrian commander called Naaman who suffered with leprosy. A servant told him he could get healing in Israel so he took a great amount of wealth with him and went to Israel. Elisha the prophet did not go to meet him but sent a message that he should wash in the Jordan seven times and he would be healed. Naanan dismissed this suggestion saying there were better rivers in Syria. His pride was revealed. He thought he could buy favour with God and that he knew the best way to act. But the word of God to him was a stumbling stone and a rock of offence. He had to give up his pride and humble himself before God, do as God told him and then he was healed (2 Kings 5:14).

3 Is not this the carpenter, the son of Mary and brother of James and Joses and Judas and Simon? And are not his sisters here with us?” And they took offense at him.
4 And Jesus said to them, “A prophet is not without honor, except in his hometown and among his relatives and in his own household.” – Mark 6:3-4

People could not believe that a simple carpenter from Nazareth could possibly be the Son of God. When Jesus taught about the Kingdom of God many Pharisees (the religious leaders of Judaism) were offended:

Then the disciples came and said to him, “Do you know that the Pharisees were offended when they heard this saying?” – Matthew 15:12

They were full of of pride and God used the Stumbling Stone and Rock of Offense to bring them down to a place where they could turn from their pride and be healed, humble themselves and be saved.

Jesus came to us as a humble servant. The Jewish people were expecting a victorious king. It was offensive to them to consider a person who was crucified could ever be the Blessed One sent from God to redeem mankind. But He was and we need to be willing to humble ourselves before our saviour, fall before Him and accept His way, not our way.

Posted in Romans
← You who were not beloved I will call ‘beloved.’That they might be saved →