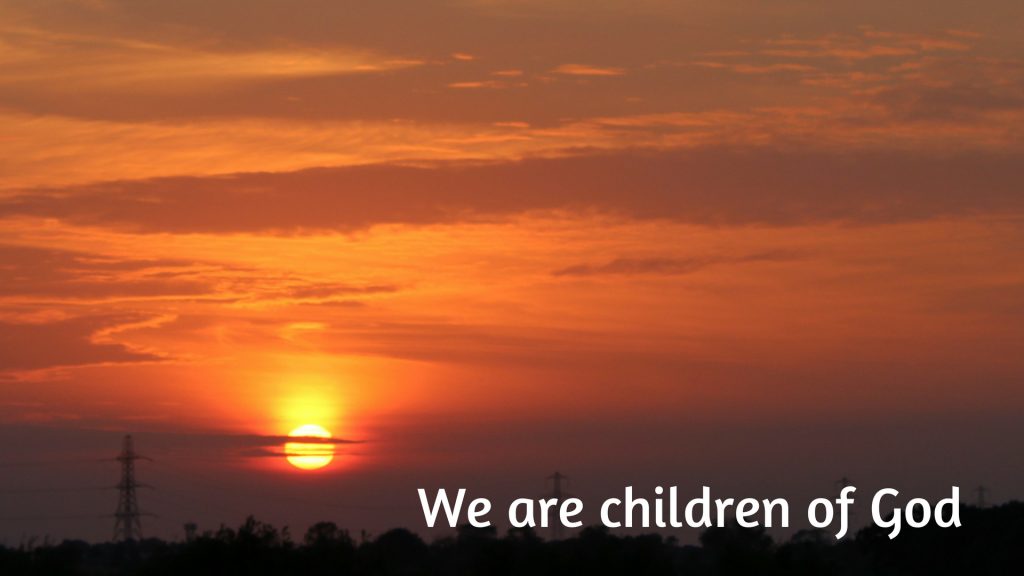 15 For you did not receive the spirit of slavery to fall back into fear, but you have received the Spirit of adoption as sons, by whom we cry, “Abba! Father!”
16 The Spirit himself bears witness with our spirit that we are children of God,
17 and if children, then heirs-heirs of God and fellow heirs with Christ, provided we suffer with him in order that we may also be glorified with him. – Romans 8:15-17

God has given us the Spirit. We do not have to fear that we will fall back into sin. Sin no longer has control. Satan drives people into sin but God leads people by the Holy Spirit. Satan isolates people by making us hide in shame. But God draws believers to Him. We have been adopted into the family of God.

5 to redeem those who were under the law, so that we might receive adoption as sons.
6 And because you are sons, God has sent the Spirit of his Son into our hearts, crying, “Abba! Father!” – Galatians 4:5-6

Roman adoption was arranged so that the adopted child had exactly the same rights as a child who was born into a family. But as well all the old rights of the previous family were wiped out, so that nothing from the past could be counted against them. Such a picture of our new life in Christ. We have a close relationship with God provided through Jesus and our old relationship with sin and death is wiped out.

14 Since therefore the children share in flesh and blood, he himself likewise partook of the same things, that through death he might destroy the one who has the power of death, that is, the devil,
15 and deliver all those who through fear of death were subject to lifelong slavery. – Hebrews 2:14-15

However, part of the adoption is that as part of the family we will partake in the sufferings of Christ. Jesus suffered because the world did not understand Him. We are not of this world.

And the world does not understand the things of God and therefore despised and rejects the representatives of the kingdom of God.

But we see him who for a little while was made lower than the angels, namely Jesus, crowned with glory and honor because of the suffering of death, so that by the grace of God he might taste death for everyone. – Hebrews 2:9

13 But rejoice insofar as you share Christ’s sufferings, that you may also rejoice and be glad when his glory is revealed.
14 If you are insulted for the name of Christ, you are blessed, because the Spirit of glory and of God rests upon you. – 1 Peter 4:13-14

To suffer with Christ is a privilege. We are in Him and He is in us. So, we as children of God and heirs of the eternal kingdom will be treated the same way Christ was treated:

He was despised and rejected by men, a man of sorrows and acquainted with grief;
and as one from whom men hide their faces he was despised, and we esteemed him not. – Isaiah 53:3

As an adopted child of God we will be treated as His son.

Posted in Romans
← For all who are led by the Spirit of God are sons of GodCreation waits for the revealing of the sons of God. →