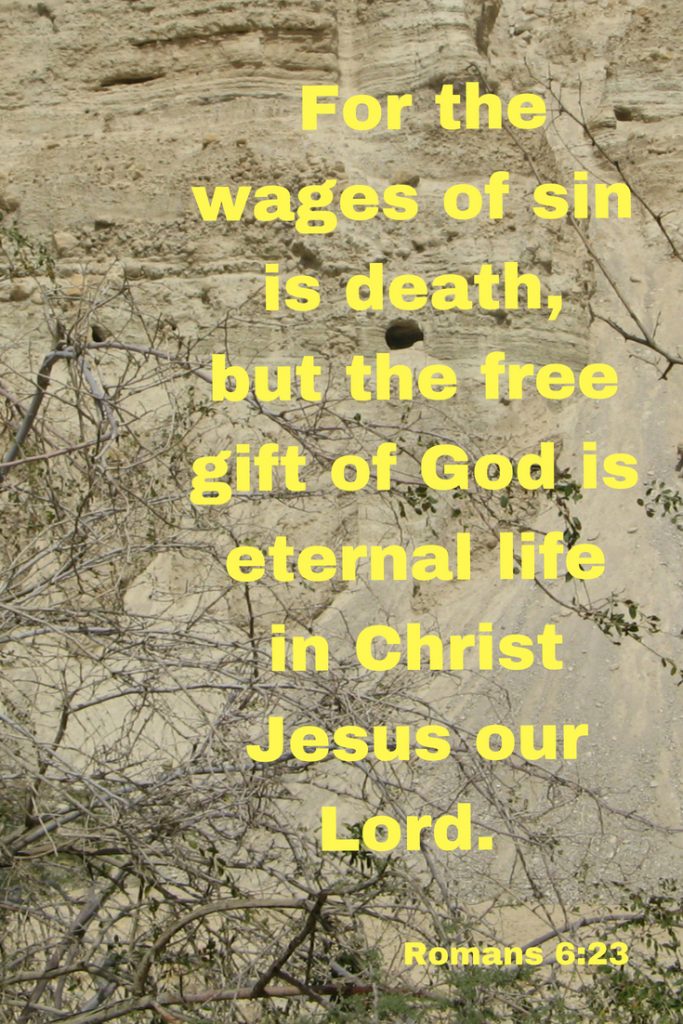 20 For when you were slaves of sin, you were free in regard to righteousness.
21 But what fruit were you getting at that time from the things of which you are now ashamed? For the end of those things is death.
22 But now that you have been set free from sin and have become slaves of God, the fruit you get leads to sanctification and its end, eternal life.
23 For the wages of sin is death, but the free gift of God is eternal life in Christ Jesus our Lord. – Romans 6:20-23

What a fantastic summary verse 23 is to this whole section. Paul has told us about life and death, sin and righteousness, slavery and freedom, the old self and the new self, the realm of Satan and the kingdom of God, impurity and holiness, grace and the law, death and resurrection. And he summaries in one sentence, the reward of sin is death and the free gift of life comes through Jesus Christ our Lord. This verse is a diamond as it summarise the gospel. It is used extensively when sharing the gospel but when we see it in context it summaries so beautifully the content of chapter 5 (the hope of glory) and chapter 6 (freedom from sin). In the next chapter Paul will teach about freedom from the law.

We know that our old self was crucified with him in order that the body of sin might be brought to nothing, so that we would no longer be enslaved to sin. – Romans 6:6

We know that Christ, being raised from the dead, will never die again; death no longer has dominion over him. – Romans 6:9

We have been set free from sin. As you progress as a Christian the Holy Spirit makes you aware of God’s perspective on sin. The human perspective is to judge ourselves against others and approve of or excuse our behaviours.  But Jesus taught:

9 He also told this parable to some who trusted din themselves that they were righteous, and treated others with contempt:
10 “Two men went up into the temple to pray, one a Pharisee and the other a tax collector. 11 The Pharisee, standing by himself, prayed thus: ‘God, I thank you that I am not like other men, extortioners, unjust, adulterers, or even like this tax collector.
12 I fast twice a week; I give tithes of all that I get.’ 13 But the tax collector, standing far off, would not even lift up his eyes to heaven, but beat his breast, saying, ‘God, be merciful to me, a sinner!’
14 I tell you, this man went down to his house justified, rather than the other. For everyone who exalts himself will be humbled, but the one who humbles himself will be exalted.”

There is no place for pride when we have God’s perspective on our sin.

Posted in Romans
← Obedience From the HeartThe Law. →