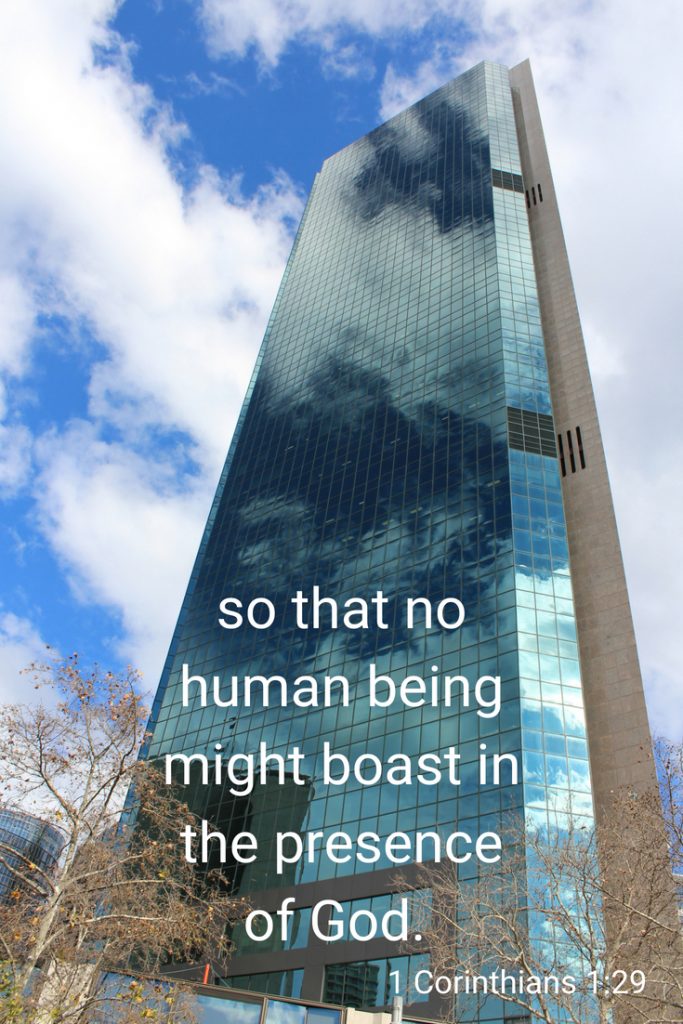 25 whom God put forward as a propitiation by his blood, to be received by faith. This was to show God’s righteousness, because in his divine forbearance he had passed over former sins.
26 It was to show his righteousness at the present time, so that he might be just and the justifier of the one who has faith in Jesus.
27 Then what becomes of our boasting? It is excluded. By what kind of law? By a law of works? No, but by the law of faith.
28 For we hold that one is justified by faith apart from works of the law. – Romans 3:25-28

Propitiation is another specifically biblical word and concept. The current meaning is “to please a god or a diety”. But the biblical meaning goes way back to the time of the arc of the covenant. Once a year the High Priest went into the Holy of Holies to sprinkle blood on the altar during the day of atonement. This symbolic act covered the sins of the nation. The blood was sprinkled on the mercy seat the covering lid of the ark and this cover was called in the Greek the “hilasterion” – the word that means propitiation. The mercy seat was the place where God met man to accept the atonement of the blood sacrifice. The mercy seat sat on top of the copy of the Law that was in the ark and this whole picture symbolised how God has made a provision for us through the atoning blood of Jesus that satisfied the law. We need to learn to cover one another in prayer, in love, with acts of kindness to express the love Jesus has shown us through giving His life for us as a propitiation, that pleases God, and allows us into His presence

The translation of verses 27 and 28 is a little hard to understand in the English Standard Version. The New Living Translation says:

27 Can we boast, then, that we have done anything to be accepted by God? No, because our acquittal is not based on obeying the law. It is based on faith.
28 So we are made right with God through faith and not by obeying the law. – Romans 3:27-28 (NLT)

There is no place for boasting which is something human nature loves to do. We love to take pride in what we do and  the world system encourages us to. In fact pride has become an acceptable aspiration. For example Humber Prison’s tag line is “Pride in Humber” and now we see “Police with Pride” on the side of our local police vans.  In the book of Genesis chapter 11 we read of the construction of the tower of Bable. The people said:

Then they said, “Come, let us build ourselves a city and a tower with its top in the heavens, and let us make a name for ourselves, lest we be dispersed over the face of the whole earth.” – Genesis 11:4

“Let us make a name for ourselves”. Let’s be proud of our achievements. We will be recognised as somebody important. Doesn’t that capture the culture of celebrity that is so prevalent in our society? People want to “be somebody” want to be “liked” on social media. Lucifer said:

You said in your heart, ‘I will ascend to heaven; above the stars of God I will set my throne on high; I will sit on the mount of assembly in the far reaches of the north;  – Isaiah 14:13

He wanted to “be somebody”. He wanted to be like God. That caused him to be cast out of heaven. The devistating consequences of his pride.

The natural man hates the fact that we are justified freely by His grace. But we are called to be humble before God. What are we in comparison to the creator of the universe? We can do nothing in ourselves to change our standing before God. We have to accept His grace and loving kindness with humility and gratitude. We are foolish and weak:

Our boast is in God:

In God we have boasted continually, and we will give thanks to your name forever. Selah  – Psalm 44:8

Our boast is in Jesus:

but Christ is faithful over God’s house as a son. And we are his house, if indeed we hold fast our confidence and our boasting in our hope. – Hebrews 3:6

He is the one who should receive all the glory.