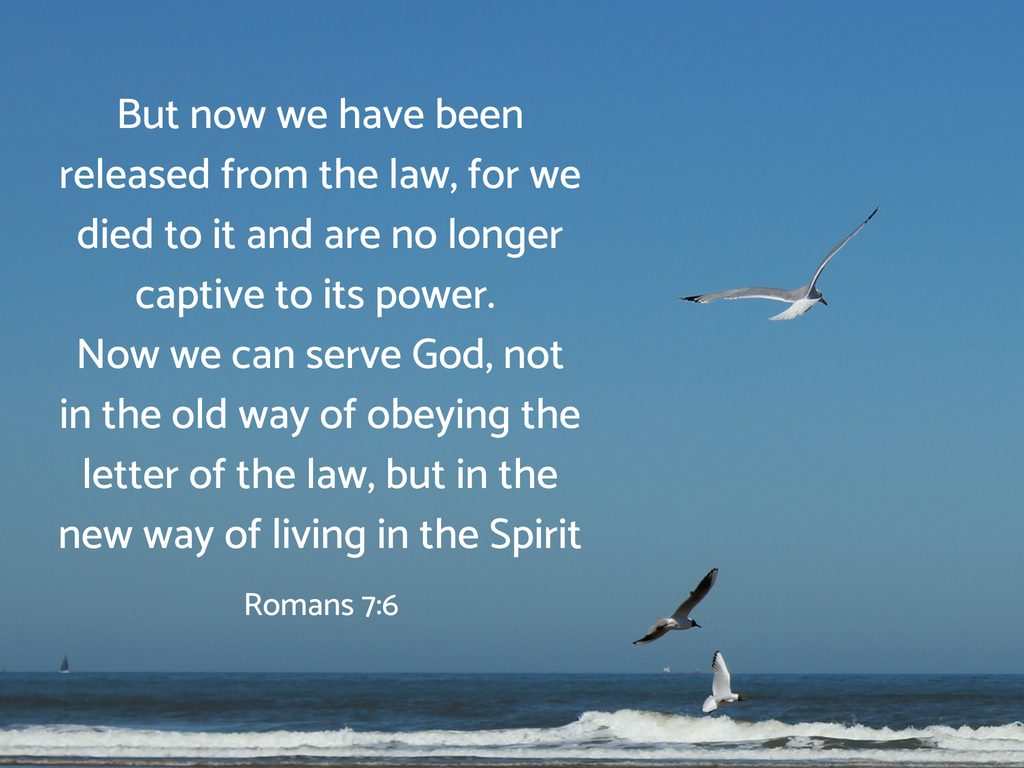 4 Likewise, my brothers, you also have died to the law through the body of Christ, so that you may belong to another, to him who has been raised from the dead, in order that we may bear fruit for God.
5 For while we were living in the flesh, our sinful passions, aroused by the law, were at work in our members to bear fruit for death.
6 But now we are released from the law, having died to that which held us captive, so that we serve in the new way of the Spirit and not in the old way of the written code. – Romans 7:4-6

We have died with Christ, and now we live in Him:

We have been resurrected in Him:

Now if we have died with Christ, we believe that we will also live with him. – Romans 6:8

That means we are now released from the law. We belong to Christ so that we can produce life in others by being obedient to the Lord :

and, having been set free from sin, have become slaves of righteousness. – Romans 6:18

I am the vine; you are the branches. Whoever abides in me and I in him, he it is that bears much fruit, for apart from me you can do nothing. – John 15:5

It is interesting that Paul points out that our sinful passions are aroused by the law. What does that mean? Well, on a tiny level if you see a sign saying wet paint don’t you just want to test it to see if it is wet? If a sign says “don’t walk on the grass” isn’t it tempting to walk on the grass. If God says don’t eat of the fruit of the tree of the knowledge of good and evil, isn’t it tempting to listen to Satan who makes out that God is holding something back from us (Genesis 3:1-7)? It’s human nature to break the rules. From speed limits to stealing, murder and adultery. But those who believe the word of God have been released from the law to serve the Living God through walking in the way of the Spirit:

We now serve the way of the Spirit not the way of the written moral code obliging is to do something to obtain the favour of God. We are released from the law by the grace of God through Christ Jesus and the power of the Holy Spirit.

Posted in Romans
← The Law.You Shall not Covet →