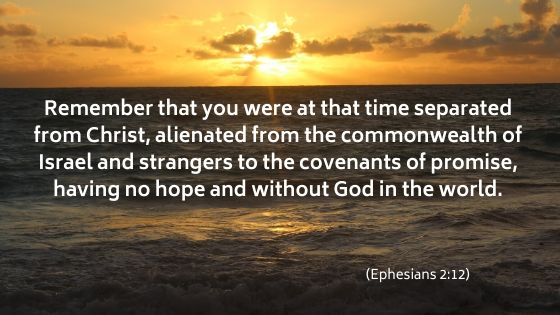 11 Therefore remember that at one time you Gentiles in the flesh, called “the uncircumcision” by what is called the circumcision, which is made in the flesh by hands— 12 remember that you were at that time separated from Christ, alienated from the commonwealth of Israel and strangers to the covenants of promise, having no hope and without God in the world. 13 But now in Christ Jesus you who once were far off have been brought near by the blood of Christ.

In the last post, we saw that we have nothing to boast about. This time Paul looks at being separated. Let’s start by looking at a couple of terms Paul uses.

In the Bible circumcision is an outward sign of being a part of God’s chosen people. God told Abraham to circumcise every male in his household (Genesis 17:10). God made a covenant, (a promise, an alliance) between Himself and Abraham. Circumcision was the outward sign of accepting that covenant. Moses also repeated the instruction (Leviticus 12:3). The tradition of circumcision had been an important part of Jewish culture.

Historically when people of the ancient Near East made a formal covenant they would walk together between two halves of a slaughtered animal. This implied that the person who breaks the covenant would end up like the animal. Severe punishment for breaking the covenant! To some extent, the act of circumcision reminds them of this tradition.

However, what God really wants is people with humble and contrite hearts.

To circumcise the heart means to make it open and accessible to God for Him to enable repentance and faith in Him (Deuteronomy 10:16, Jeremiah 4:4, Romans 2:29). God wants us to love Him with open transparency about what is in our hearts. More information about circumcision of the heart can be found here.

In this letter, Paul uses the term “the circumcision” referring to the Jews who would read his letter.

The term “the uncircumcision” became an expression that referred to any person who was not Jewish, also known as Gentiles. The relationship between Jews and Gentiles was strained. Often seen as enemies of the Jews, Gentiles were despised. But, Paul became the Apostle to the Gentiles (Romans 11:13, 1 Timothy 2:7). He wanted unity between the Jews and Gentiles in the church. Paul did not think circumcision or uncircumcision counted before God (1 Corinthians 7:19). Doing what God wants us to do is more important.

In this passage, Paul reminds the Ephesian church, who were mostly Gentiles, that they were once separated from God.

In close relationships separation causes distress. Absence may make the heart grow fonder but togetherness is what we all seek. We are designed to be in relationships. It is not good for man to be alone (Genesis 2:18). The most important relationship God designed us for was to be one with Him.

Separation from God is death. We explored being dead in sin in earlier posts in this series.   If we remain separated from God we remain alone, no matter how many relationships we have. Life is knowing God (John 17:3). While you are alive on this earth you have the opportunity to get to know God through faith in Christ Jesus the Lord.

Paul points out to the Ephesian church that once they were separated from Christ, alienated from the Jewish people, strangers to the promises of God, having no hope and without God.

No hope and without God

It appears that a vast majority of people live with no hope and without God. Hope is such an important part of our mental traits. But, hope has to be based on something substantial. Psychologists recognise hope is beneficial.  But, true hope is based on the promises of God.

Blessed is he whose help is the God of Jacob, whose hope is in the LORD his God, (Psalm 146:5)

24 For in this hope we were saved. Now hope that is seen is not hope. For who hopes for what he sees? 25 But if we hope for what we do not see, we await for it with patience. (Romans 8:24)

in hope of eternal life, which God, who never lies, promised before the ages began (Titus 1:2)

But, what do people put their hope in? Governments, science, relationships, the lottery, fate? True hope has to be based on a promise that will be fulfilled. We have the promise that: in Christ Jesus you who once were far off have been brought near by the blood of Christ.

By the Blood of Christ

We can put all our hope in the precious blood of Jesus that cleanses us from our sins (1 John 1:7). We have been brought near to God by Christ.

19 Therefore, brothers, since we have confidence to enter the holy places by the blood of Jesus, 20 by the new and living way that he opened for us through the curtain, that is, through his flesh, 21 and since we have ta great priest over the house of God, 22 let us draw near with a true heart in full assurance of faith, with our hearts sprinkled clean from an evil conscience and our bodies washed with pure water (Hebrews 10:19-22).

In the next post, we will learn more about experiencing peace