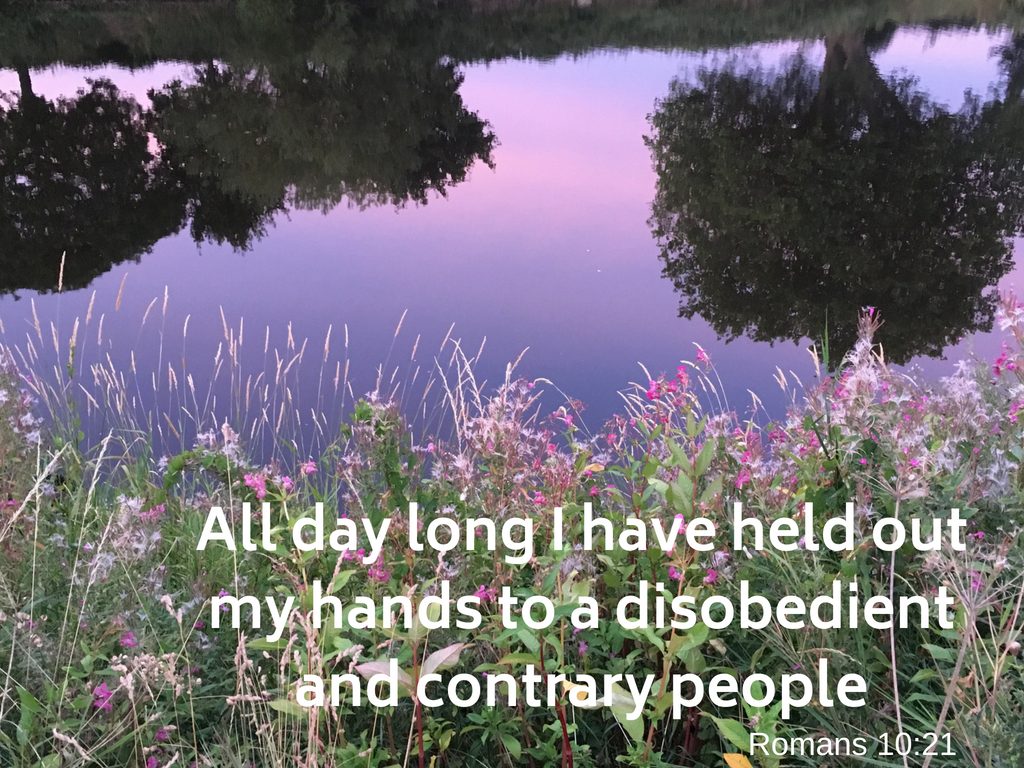 18 But I ask, have they not heard? Indeed they have, for “Their voice has gone out to all the earth, and their words to the ends of the world.”
19 But I ask, did Israel not understand? First Moses says, “I will make you jealous of those who are not a nation; with a foolish nation I will make you angry.”
20 Then Isaiah is so bold as to say, “I have been found by those who did not seek me; I have shown myself to those who did not ask for me.”
21 But of Israel he says, “All day long I have held out my hands to a disobedient and contrary people.” – Romans 10:18-21

The Lord God has constantly held out His hand to His people. He has a special purpose for His chosen people: the children of Abraham. God called Abraham to leave his country and go to a land promised by God. Since then God has spoken to the Jewish people through His prophets and all of them had the same message. Change your ways and return to your God and you will be blessed. The prophets spoke openly to the leaders and kings as well as to the people:

I will make with them an everlasting covenant, that I will not turn away from doing good to them. And I will put the fear of me in their hearts, that they may not turn from me. – Jeremiah 32:40

7 For he is our God, and we are the people of his pasture, and the sheep of his hand. Today, if you hear his voice,
8 do not harden your hearts, as at Meribah, as on the day at Massah in the wilderness, – Psalm 95:7-8

God wants to reveal Himself to His people but is restricted by our hardness of heart and our rebellious nature. God reveals Himself to the humble:

9 He leads the humble in what is right, and teaches the humble his way.
10 All the paths of the LORD are steadfast love and faithfulness, for those who keep his covenant and his testimonies. – Psalm 25:9-10

But he gives more grace. Therefore it says, “God opposes the proud but gives grace to the humble.” – James 4:6

God has revealed Himself through Jesus Christ and now the Holy Spirit will lead anyone to Him. Whoever will turn to Jesus, with a soft heart, a willingness to learn and a humble attitude and believe He was raised from the dead will be saved. The same message. Change your ways and return to your God and you will be blessed.

1 Long ago, at many times and in many ways, God spoke to our fathers by the prophets,
2 but in these last days he has spoken to us by his Son, whom he appointed the heir of all things, through whom also he created the world. – Hebrews 1:1-2

and saying, “The time is fulfilled, and the kingdom of God is at hand; repent and believe in the gospel.” – Mark 1:15

Posted in Romans
← What is Faith?Has God Rejected His People? →